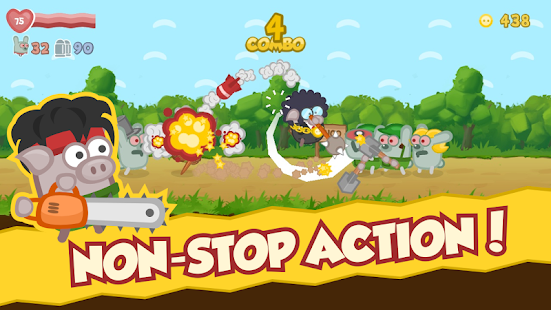 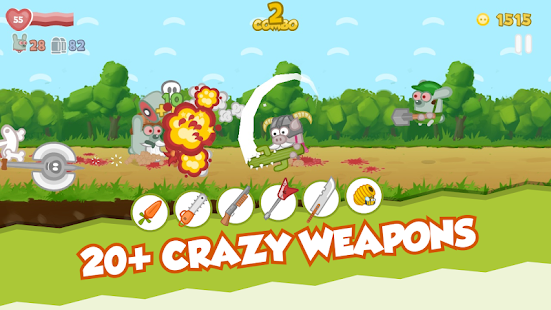 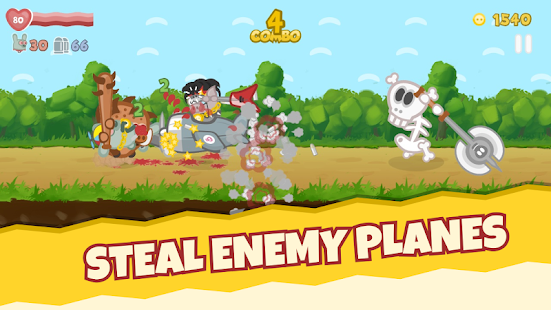 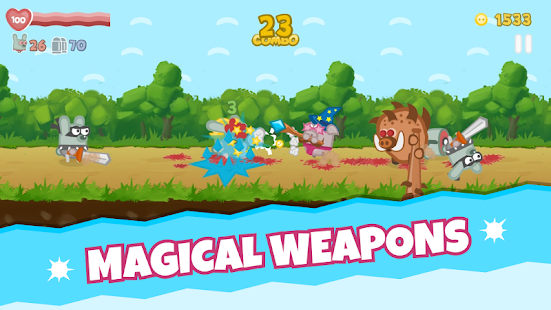 Bacon May Die is a fast paced 2D fighting and shooting game in which angry pig Bacon must brawl with army of bacon hungry zombie bunnies and kill hordes of monsters, survive boss fights and unlock tons of weapons and outfits!

Get your fingers ready for action!

Smooth and responsive controls
Wiggle your thumbs to warm them up for a smooth swipe fighting controls, where quick taps will make our tiny pig hero swing its weapon, swipes will initiate dodging, jumping and rolling moves and holding touch longer will switch to ranged attack mode with a cool movie-like slow motion effects. These simple thumb fight controls are very easy to learn and you’ll be doing deadly combos with bad piggie fighter in no time!

Fight zombies, monsters and skeletons
The sidescrolling road to survival is full of bad and dangerous creatures, which will stand in a way of our angry fighter piggy and must be destroyed. In forest arena our deadly killer ninja pig will face mutated zombie bunnies, bunny bandits, bombers, rocket shooting enemies and brawl with hog fighters. Rush through darkest dungeon which is crawling with spooky skeleton swordsmen, bone throwers and other deadly monsters.

100+ items to unlock
Bacon May Die, fun 2D brawl game, brings a huge variety of items to reward your survival skills and piggy kung fu mastery! Earn coins by fighting monsters and you will be able to unlock funny outfits to dress up your angry pig as famous game or movie characters.

Huge variety of weapons is available to aid your angry piggy hero! This fun 2D fight game wouldn’t be complete without the gun shooting part, so you can unlock and use such ranged weapons as pistol, revolver, UZI, machine gun, rocket launcher, shotgun, ninja stars and even a bee launcher! If you prefer mortal close combat, then there’s a big selection of deadly melee weapons for you to swing around: baseball bat, sword, scythe, guitar, chainsaw, katana, pan of bacon and other useful zombie fighting tools to power up your bad pig ninja!

Fun little things
There are many secret mechanics In this pig survival game – you can hire a chicken to be your follower pet and fight by your side, hijack enemy plane and pilot it around the arena shooting rockets or just knock back projectiles back at your foes! Latest update added a medic NPC, which will provide healing and super powers to boost your angry pig fighter!

More to come!
This fun beat em up sidescroller game is under active development, so you can expect more arenas, deadly boss fights, enemy monsters and weapons added in the future. Don’t hesitate to use in-game feedback function and send your crazy ideas – all of them will be considered!

If you’re looking for more action packed 2D fighting games for boys check out my other projects like Iron Snout or jetpack shooter Cave Blast.